In this blog, many entries are about the most expensive rocks and the priciest jewels you can find on this planet. (Earth, Just in case you were confused.) However, the popularity of these fantastic objects is not necessarily related to the number on their price tags. The proof is in the following list of, you guessed it, diamonds. I have traveled the world (aka. The Internet) to bring you the stories of the greatest diamonds known to man…

The history of this diamond is a violent and bloody one. The Koh-I-Noor was won and lost in a number of battles after being discovered in Punjab (India). In fact, legend had it that, whoever possessed the diamond ruled the world. After a long history of being passed down from one ruler to another, which in many cases involved bloody conflicts and trickery, it was offered to Queen Victoria in 1849. Queen Victoria recut the stone taking it down to 109 carats from 186. As stipulated by Queen
Victoria, the Koh-I-Noor has adorned the crown of the spouse of each reigning monarch ever since. 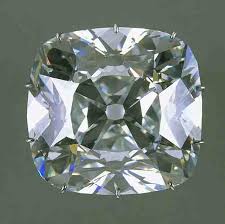 The Regent is not just any old diamond.  It is the most beautiful diamond of the Crown of France.  Discovered in 1698, legend has it that it was given to Thomas Pitt by a slave in exchange for his liberty.  After it was cut in 1702 (from 426 to 140.5 carats), Pitt tried to sell it.  This was no easy task given its high price and the fact that it was thought to be cursed.  He had to wait 15 years until 1717, when Philippe d’ Orleans, Regent of France, would come along and buy the stone.  Like the Sancy, the Regent was also part of the crown that was used to coronate Louis XV in 1722.  It was later mounted on a number of ornaments.  After the Revolution, the diamond was used as a guarantee to finance the armies of Napoleon Bonaparte.  The diamond became his good luck charm and was mounted on his consular sword.  After he became emperor in 1804 it was mounted on his sword.  Today you can find this magnificent stone in the Louvre. More recently discovered than the previously discussed diamonds (in 1980 in the Democratic Republic of Congo), the Incomparable is unique in its cut (called the Triolette).  At 890 carats, it is also the biggest yellow- brown diamond yet to be discovered.  Its purity is said to be ‘internally flawless’ (IF).  This means that there are no flaws visible at 10x magnification, but there may be external irregularities.  The Incomparable is truly a remarkable diamond.

…Oh, I haven’t finished yet….There’s more to come in my next entry!

2 thoughts on “The Most Famous Diamonds in the World! (Part 1)”