Hello, Jewelry Friends Around the World!

In the previous entry, we began our tour of the most famous diamonds on Earth with The Koh-I-Noor, The Regent, and The Incomparable. Today, we will discuss two other “natural wonders”, equally as magnificent and popular as the first three. 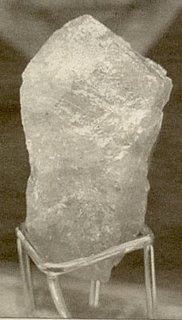 At 726.6 carats, the Vargas was the third largest diamond in the world at the time of its discovery in 1938 in Brazil. In 1945, it was cut into 29 diamonds, together totaling 411 carats after having lost 315.6 carats in the cutting process.

Also called the “Le Bleu de France” or the “Cursed Diamond”, this 112 carat rock seems to have brought misfortune to all who acquired it.  Louis XIV bought this diamond in 1672 after it was found in India (in 1668) and cut it into the shape of a heart, resulting in a loss of nearly half of its size. After this, it didn’t take long for the Hope to earn its reputation as a bad luck charm. Legend has it that the curse comes from its having been stolen from the hands of a statue of a Hindu goddess, who has been very, very angry ever since….

Her first victim went by the name of Tavernier, who after having arranged for the transport of the blue stone from India to Paris, died shortly after. He was savagely torn apart and eaten by wild dogs.

Many rather disturbing events were to follow.  Louis XVI and Marie-Antoinette, who inherited the stone, found themselves with a shiny diamond, but… without their heads. They were beheaded during the French Revolution.

In 1792, the diamond went missing. This was probably for the best given what happens to those who lay hands on it. It reappeared almost 40 years later in London, weighing only 44.5 carats. Wilhelm Flas, the jeweler who acquired it tried to cut it to mask its identity and so, facilitate its sale. This effort proved to be in vain. After his own son stole the diamond, he would die of grief, and his son would commit suicide a few years later. The banker Henry Philip Hope bought the diamond a little later. Ruined, he had to sell the diamond to pay off his debts. He and his family died soon after, penniless. An unknown prince would then lay his hands on the jewel and offered it to an actress from the Folies Bergeres. It would kill her a few months later. The next to own the stone would die in a car accident with his entire family. The owner to follow was the Sultan Abdulhamid. A few weeks after his unfortunate purchase, a rebellion would send him running from the throne of the Ottoman Empire.

Oh, and I’m not finished. The Hope would continue its thirst for blood and its quest for destruction.

A rich American would then acquire the blue stone. The result: Her son would die in a car accident, her husband would go crazy, and her daughter would die of an overdose in the years to follow. In 1947, the curse seems to have reached its limit. The jeweler Harry Winston bought the diamond in 1947 and sold it to the Smithsonian in Washington DC.

In 2005, studies were carried out in an attempt to find out the truth about the Hope’s connection to the tragedies that seem to follow it where ever it lands…

Don’t go away. There is more to come in my next entry. 🙂