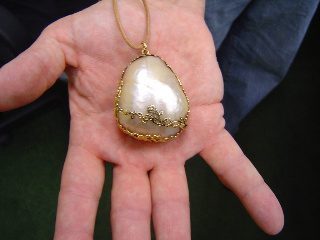 Hello, hello my pearls and diamonds!  Welcome back.

We began our list of incredible pearls in our last article with the Pearl of Lao-Tzu, an amazing giant clam pearl. Today, we are going to continue our summary of these famous pearls, some of which are set as pendants, in necklaces, or as part of other magnificent pieces of jewelry.  (Feel free to add your favorite pearls to the list in the comments section.)

The Pearl of Asia

The Pearl of Asia (side note: the name also referred to Phnom Penh, Cambodia back in its heyday) is a beautiful eggplant shaped nacreous pearl.  This magnificent baroque pearl is the largest nacreous pearl in the world at 600 carats (2,400 grains).  Rumor has it that it was discovered in the Persian Gulf some time in the 16th or 17th century.  Do you remember our Mughal friends? This pearl belonged to them.  In fact, Shah Jahan, the very Mughal ruler who was responsible for the architectural marvel the Taj Mahal, gave it to his wife as a gift.  Nadir Shar, King of Persia, would claim the pearl after his siege of Delhi in the mid 1700s.  Shar then gave the pearl to Emperor Qianlong of China.  The emperor used the jewel to adorn his tomb upon his death.   Grave robbers looted the tomb.  The Pearl of Asia was lost for years until it reappeared in Hong Kong. It was subsequently sold in Paris.

The Gogibus pearl is said to have been the largest in Europe for a time.  This glistening, pear-shaped pearl was brought from the West Indies in the 1600s by a French native called Francois Gogibus.  The pearl weighs in at 126 carats (504 grains) and cost a fortune for Gogibus to acquire. Luckily, there was a very rich client, the King of Spain at the time, Philip IV, who took interest in Gogibus’ booty.  He proceeded to buy the pearl and mount it on the royal cap.

Remember the Hope Diamond? Of course you do!  Such a magnificent specimen is not likely to be forgotten.  Well, guess what? There is also a Hope Pearl.  I bet you didn’t know that

Like its diamond counterpart, it is enormous.  It is even considered to be the largest saltwater pearl in existence.  Banker and jewel collector Henry Philip Pope first acquired the pearl in the 19th century to add to his extensive collection.  The Hope later formed part of the collection at the South Kensington Museum before it was auctioned by Christies in the late 1800s and, after passing through a number of hands, has found itself in the private collection of its lucky owner.

I hope you have enjoyed today’s entry on the most incredible pearls in the world.  I bet you can’t stop thinking about all of the beautiful necklaces, bracelets, rings, and earrings you could make with all of the pearly wonders of the world.